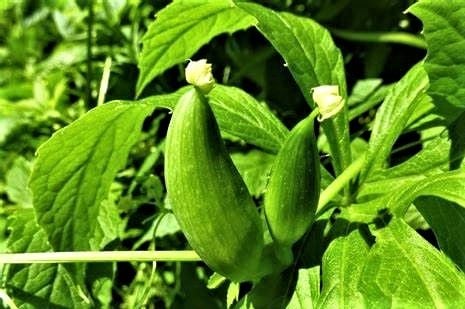 OH Pronounced Kai-wa, this unusual vegetable is native to the coastal Andes region of Peru in South America, where the vine has been cultivated since ancient times. First documented through illustrations on pottery that was recovered from the Moche civilization, dating to 800 CE. Also known as Achocha, Caihua, Slipper Gourd, Stuffing cucumber, and Ladies Slipper this relative to the cucumber was traditionally used to reduce blood cholesterol and high blood pressure. Caigua is an excellent source of vitamin C, an antioxidant that can help boost the immune system and is a good source of fibre, which can help regulate the digestive tract. The vigorous climber resembles a bitter melon vine and can be grown over a trellis or fence and even left to sprawl over the ground. The fruit are best eaten at an immature 2-3cm stage as a gourmet item for summer salads with a pleasant cucumber-like crispness and taste. The leaves and young shoots can also be eaten as greens. When young, they are great in salads, and make a lovely pickle. Once mature they become hollow and it is best to scoop the seeds out and stuff them with meat, rice, herbs and spices, similar to what you would stuff a pepper with, and it is said that once cooked their flavour is reminiscent of green pepper. In Peru, Caigua is commonly cooked into a stew-like, sofrito dish and mixed with mashed potatoes. If you like trying something new, we highly recommend! Frost tender.

Sow in trays in September prick out to 4cm spacing when true leaves appear. Transplant at 50cm diagonal spacing into fertile garden in direct sun. Does best with a support, but is not neccesarry.