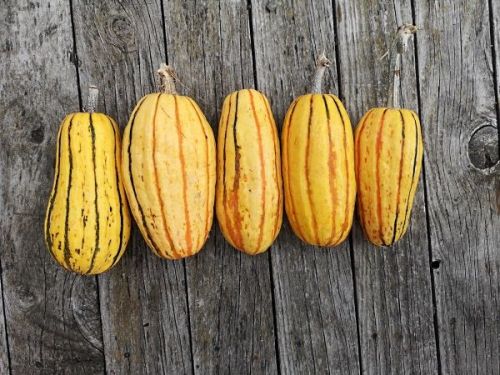 Out of stock.
0 in your basket
View Basket Checkout

OP Originally a heritage variety introduced by Native Americans to the European settlers. “Delicata” was first listed commercially in the USA by Peter Henderson in 1894. It lost popularity during the Great Depression due to its susceptibility to powdery mildew. Almost forgotten about until 2002 when an open pollinated line hit the scene bred by Cornell University’s plant breeders Molly Jahn and George Moriarty.  This variety received the prestigious All-American Selection Still award in 2002. Still has the amazing heritage flavour, but also became a compact bush type and is disease resistant to powdery mildew. Great for home gardeners as it is prolific and easy to fit in small gardens. We love Delicata for its flavour and ease to cook in the kitchen. Individual fruits are small and ideal for two people. No more wondering what to do with all that pumpkin once you cut one open! We received this seed in a slightly crossed state. We are continuing to select for true to type Delicata and believe that our line is pretty true. Please get in touch if you find your seed to be crossed, so that we can remedy the situation.