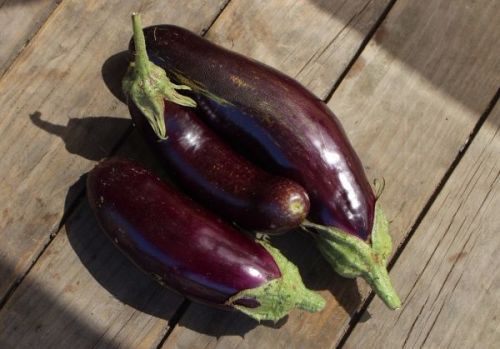 OH Eggplants were originally domesticated from one of the wild nightshade species in Asia first recorded in 544. This heritage variety is presumed to have come from Japan and was first recorded as being grown in other parts of the world as early as 1855. It is great for growing outdoors as it is faster to ripen securing a crop even in colder climates. Glasshouses of course are the preferred place to raise eggplants, but we have grown this variety to prolific maturity outdoors! Great tasting we prefer to fry in butter and salt either on its own or as part of an Italian medley with tomatoes, peppers, basil, onions and garlic! Grows to 50cm tall prefers staking and produces many fruit 23cm in length with a diameter of 4cm.

Sow in August into trays in a glasshouse. Keep soil temp above 18°C for ideal germination. Prick out when true leaves appear to 4cm diagonal spacing. Pot on to small pot to further develop roots. Transplant after last frost to 40cm diagonal spacing into fertile ground in direct sun.