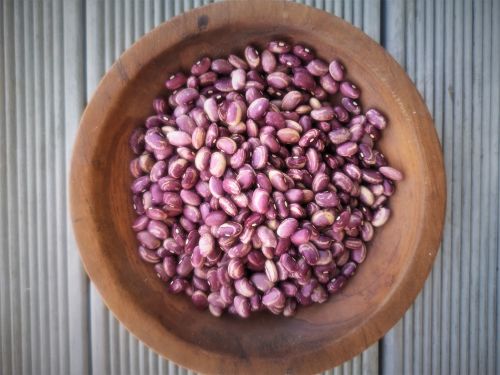 OH This bean also known by the name Cunti Muni de los Yaquis, originated in the Sonoran Desert and was cultivated by the Yeomi or Yaqui people in Sonora, Mexico around the Yaqui River.  The Spanish made contact first in 1533 but through several battles we held off by the Yaqui and other Mayo warriors. It was not until the 1608 that a peace treaty was signed and a Jesuit settlement was established. So, it would seem that through the Jesuits or a group of Yaqui (Pascua Yaqui Tribe) that settled in Arizona this bean was shared out into the world. A prolific cropper with a bush/pole habit. Pick when very small and flat for tender tasty green beans, before beans start to swell inside the pod. Or use as a shell out or dried bean. A heat tolerant and fast maturing variety which can be grown with or without support.

Sow in trays in glasshouse in September or direct in the garden when chance of frost has passed. From trays prick out when true leaves appear and transplant into fertile soil at 15-20cm spacing under a trellis for support or in diagonal bed spacing at 30cm if not using a support. For autumn crop repeat sowing in January/February.